1. Remember that a puppy is still a toddler, and doesn't have complete control of his or her body yet. You need to set things up so that he doesn't have a chance to have an accident, and if he does have one, get a newspaper, roll it up, and thwack yourself on the butt while chanting, "I will supervise my puppy better." For instance, they CAN'T wait. When they need to go, they need to go NOW! So don't be surprised if, when you dawdle around getting your shoes and coat on, you end up with a puddle. It may help to carry your puppy swiftly from crate (or floor) to the door, as you are speedier and more agile than he is at this age. Don't worry, you and your puppy will get the hang of this together and develop a system!

2. Puppies can only be expected to "hold it" for one hour per each month of age. Even so, does not mean that he will automatically only need to go every 2 hours at 9 weeks, every hours at 12 weeks, etc etc. The more often you take him out, the more chance you have to catch him doing the right thing and rewarding him for it!

3. If you can't come home during the day to let him out every hour or two, then you need to set up a dog-safe area that's fairly large. I used an exercise pen set up in my kitchen on the linoleum floor. Furnish one end with bed, toys, and anything else he needs. Cover the floor on the other end with puppy pads so that he has an appropriate place to "go".

4. When you are home, the puppy should either be under your direct supervision, or crated. His crate should be just big enough to let him stand up, turn around, and flop down comfortably. It should also be furnished with special toys that he only gets in the crate that are extra-fun or extra-yummy, to keep him safely occupied when he needs to be in there. It would be best to put the crate in an area where the family spends time, so that he's not isolated and alone while he's in there. Think of it as a playpen for a toddler.

5. Every hour on the hour, take your puppy outside and wait for him to potty. Be boring. Don't play games, just stand there and wait for him to potty. When he does, tell him he is the smartest, most wonderful, most amazingest puppy in the whole entire world, and stuff his mouth full of treats. Going potty outside should be one of the most wonderful experiences of his young life at this point. You want to make a BIG impression that going potty outside is the greatest thing EVER and you love him for it so much you just can't help yourself, you are going to stuff treats in his mouth. Keep him outside for a further 15-20 minutes, as he may not have completely emptied himself with the first go. You can spend this time playing games and petting him and having fun, because he pottied.

After coming in from a potty, you don't have to crate him again immediately, but he needs to be under supervision. If you can't keep a direct eye on him, back to his crate he goes (with the wonderful toys there). Just remember to take him out every hour and make pottying outside the Best Thing Ever. If you see him sniffing around and circling, whisk him back outside and repeat the Potty Routine.

6. If he does have an accident in the house, do not hit your puppy or yell at him. This is the equivalent of slapping your toddler who is just starting potty training for wetting her diaper. It also teaches the puppy that it isn't safe to potty around you, which may cause you trouble down the line when you're in a situation where you NEED him to go potty on a leash with you standing there.

And again, remember: it is an ACCIDENT. Dogs who are not sexually mature are
not marking their territory or doing this on purpose, they are doing it because they don't know any better. They are dependent on you to teach them what you want from them in a way they can understand and that makes them feel safe. YOU are all your puppy has to make him feel safe, secure, and loved.

When accidents happen, also be sure to clean the spot with an enzymatic cleaner, such as Nature's Miracle, Simple Solution, or PetZyme (the PetSmart store brand). Dog noses are much more sensitive than ours, and while most cleaners will clean it up to our satisfaction, your dog will still be able to smell the waste there, and will assume it's an appropriate spot to potty.  Enzymatic cleaners are pretty dang handy to have around anyway, I've used them in the past to get red wine out of carpet, blood off of a white cotton uniform, and red clay mud out of anything at all. I'd suggest buying it by the gallon.

Poor, poor Pepe: Old-school housebreaking and why it often backfired

This post starts with a sad tale from my childhood in the suburbs of Atlanta with my family adopting a miniature poodle puppy we called Pepe, and ends with Pepe on the lam and ending up who-knows-where.  I was about 7 years old when Pepe came into our lives for what turned out to be a very short time.

Now, I don’t want to trash talk my parents because this was the 1960s and dog training was perhaps at its nadir.  (Plus my mom reads my blog so let me just say “Hey Mom! You’re of the hook!”)  Suffice it to say that, in retrospect, we did pretty much everything wrong even while following dog training standards of the day. 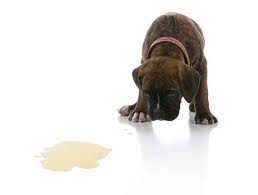 This is what I remember about how we “housebroke” Pepe:  When my mother or father would walk into the room to find a big pile of Pepe poo or a puddle of Pepe pee, there was hell to pay for that poor little dog.  Pepe would be grabbed by the scruff, his snout held into the offending substance, a rolled-up newspaper simultaneously swatting his butt as the punisher repeated a loud and scary “NO!”.

Poor Pepe indeed!  The intent was for him to somehow understand that eliminating in the house was not permitted.  What he learned instead was that every once in a while those two-legged beasts would grab him, shove his face into the dirty floor and yell at him in a very scary way.  Who can blame the poor guy from running away at the first opportunity?

There is so much wrong with this picture.  Let’s start with the term “housebreak”.  The “break” refers to breaking in the sense of breaking a horse, harkening back to old-school aversive methods for training horses.  So instead of speaking in terms of training, back then we spoke in terms of breaking, of tearing something down, presumably to build something else in its place.

Beyond that (and why such techniques so often failed) we assumed that the little puppy would somehow make a connection between the offending substance (feces, urine) and the punishment at hand.  What we now know is that you have to punish—or reward—a dog within one-half second of the behavior you are addressing for him to make the connection.  Whether 5 seconds or 5 minutes or 5 hours had passed between Pepe’s poop and the scolding was irrelevant.  Since the “correction” did not happen at the very instant of his eliminating, Pepe had no way to make the connection.  This tactic was not only woefully slow at teaching puppies where to eliminate, it was also a sure-fire tactic to create a fearful dog.  All wrong!

Sadly, I have had potential clients contact me exasperated because they’re attempting to “housebreak” their puppy with the nose-rubbed-in-poop method and cannot understand why he or she is not “getting it”.  First, I tell them to think in terms of potty training instead of housebreaking.  This is to say, reward your puppy for doing his business where you want him to (the backyard, the front sidewalk) and minimize the chances of him going where he should not—your living room floor, for instance.  How do you do that?

Over time your pup will come to understand that eliminating outside brings manna from heaven and going inside does not.  As this concept becomes more ingrained in the little guy, you’ll be in a position to finally get rid of the play pen and start opening access to your house, one room at a time.  Rule of thumb:  Your dog is fully potty trained once he has not made a “mistake” in the house for a month.  How long this takes depends on your diligence and the nature of your dog.  In my experience toy breeds take longer, sometimes well over a year.  That said, my dog Otis was completely potty trained by eight months.  Mileage may vary.

Had we known all of this back in 1967, Pepe may well have become a cherished memory instead of the source of soul-searching and guilt.  But at least today’s puppies and their people have a leg up, so to speak, on their predecessors.  Behavior science has revealed how dogs develop and learn, and we can use this knowledge to make all of our lives—human and canine alike—a little more pleasant.